skip to main | skip to sidebar

Firstly a Huge apology to everyone! I have been a bit slack with my writing of the wonders of Durban as late. I would like to blame it on the world cup! It has just been far too distracting!

A few weeks ago i was fortunate enough to drive along the Inanda Heritage Route with a friend of mines Dad who is very involved in the project. I think this day trip was one of my best yet...

First of all, how to get there! If one drives north on theN2 highway towards Gateway, you will see the Inanda off ramp, take that. There are signs along the way to help you so you don't get lost.

Inanda and Kwa Mashu were historically set as Black and Indian areas. As you drive along, you'll notice a house built in the shape of a airplane and another of a Boat. These were original homes by one of the successful businessmen at the time. If my memory serves me correctly he started one of the first bus services in the area. No historical significance, but just interesting to look out for. 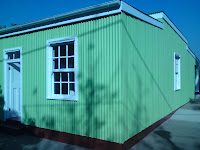 Our first official stop was Ghandi's House when he was staying in the area. He lived there with his wife and children. The house was burned down during an anti Apartheid protest, and this is a replica of the house. Mr Harbour (My friends dad) said that he was one of the first people to visit his house after the flames were out and all his litreture was burned but he found a book by Leo Tolstoy and in the book was a personal inscription to Ghandi from Leo Tolstoy himself. WOW! To prove that Ghandi was not above anyone else, he slept on a mat on the varandah, with just a blanket, this is shown by a triangle on the varandah. There are plans to build a restaurant and a BnB on the premises. Good one to look out for. There is also an information centre and crafts centre which is run by the local community. 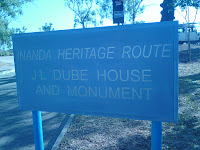 The next stop was at the Ohlange school. This was one of the first dedicated black educational school set up by John Dube. His house (below) was built in 1908 and was were he started the Ilange newspaper, which is still in publiation today. For those of you who don't know John Dube was the first president of the African National Congress. This is also the site where Nelson Mandela voted in 1994. The guide told us that Mr Mandela went stright from voting to John Dubes' grave and said, "We've done it my brother, from today we are free!" WOW!! Inger and i were in tears! So this is truely significant ground here! 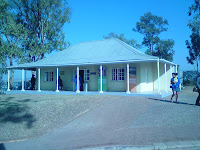 Further on down the route you will come across the Inanda Seminary School for Girls. It is a boarding school originally for black girls. Mr Harbour said that it was originally there to help educate the black women which were taken on as companions of the white colonialists. Not normal education mind you, they were tought how to make a good cup of tea and how to make bread and be good sevants / wives. Then it was taken over by missionaries who made it what it is today. A lot of the current black women in parliment attended this school. The grounds are beautiful and kept in prestine condition. The school fees are a mere R1600 a year which includes board and tuition. The girls are all very polite and you can see that they are proud of thier school, which was really good to see.

Then we went to see the Inanda Falls, which is truly breathtaking. They are currently building a viewing deck. Its perfect spot for a mid afternoon picnic!

I would suggest taking a guide with you as i would imagine one would miss out on a lot just driving through. I felt pretty safe during the trip and didn't think i was in any immediate danger.
For contacts on guides you can call the Durban Tourism information.