skip to main | skip to sidebar

Last Saturday we walked Durbans famous Golden Mile from the new Moses Mabhida Stadium to Ushaka Marine World.It really is something that Durban can be proud of. Our beachfront looks amazing!

Although it is far longer than a mile, it works out to be around 10kms there and back, you never really feel 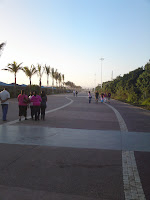 tired as there are many things to grab your attention. There were lots of families cylcling and running, and as the walk way is very wide it doesn't feel like you're squashing up against everybody else. We felt safe the whole way because of the CCTV cameras everywhere and there were many Policemen and women walking around.

There are a few new "nodes" which have been built along the way, which i believe are going to be retail stores and restaurants after the world cup. These are looking really good and should prove to be some good sunrise/sundowners' spots!

The two best points for me along the way was the South Beach area and coming up from under the M4 tunnel and facing the stadium. South Beach has a really cool little spot for Kids to play, with a jungle gym and rope bridge to play on. There are really nice new public toilets there too for the little ones.
When on your way back/to the stadium when you come from under the M4 tunnel, pause and tae a look at the stadium. It really is breath taking. See picture below.

When FIFA gives us back our stadium again, i would advise to park outside, on the old Walter Gilbert Road and walk to Ushaka and back. Then when you've really built up a thirst and an appaetite, you can replenish at the Keg and Spier. Good food and a cold beer! Highly recomended!

I can see why some people are saying that Durban will have one of the top Beachfronts after this.

Till next week,
Happy Day Tripping!
Posted by Vicky at 3:47 PM